The judo in schools project began as an idea by the President of the Israel Judo Association, Mr. Moshe Ponte, who dreamed and still dreaming of introducing judo as part of the Israeli education system, just like in japan. The project started together with one of the largest city mayors in Israel. With him, Mr. Ponte and the association, we started a pilot in 2016 in two schools of this specific city. The pilot was so successful that it began to spread by word of mouth from one mayor to another, from one sports department’s manager to another and from school administrators, students, teachers, judo coaches, etc… It just spread like wildfire. In the meantime, our association realized that someone had to dedicate all their time solely to managing the project, thanks to its rapid growth. The program became bigger and a lot of schools and local authorities wanted to take part in the success.

Today, after three years from this small pilot, the program has nearly 100 schools, and close to 7000 children engage in judo during school.

The next step and the main goal is to fulfill the vision of President Mr. Ponte and introduce Judo formally into the education system as part of the school curriculum in Israel. Something that has not happened to date, since the establishment of the state in 1948.

Focusing on the advantages of judo values ​​over other sports when presenting the program to school administrators and heads of authorities is important because when they understand the advantages of judo as oppose to other sports, they immediately reaching for your help, and when they see the changes in schools they falling in love with this sport.

When creating a system, you need to make sure that each and every side of this huge project will have their benefits: For the schools is about getting judo during school day. For the kids is learning judo for free (one of the keys to success). As of the Israeli Judo Association, it is about exposing judo across the country.

Furthermore, The Israeli Judo Association wishes to hold a unique activity of running judo lessons and classes in selected schools throughout the country within the framework of the school's activities. The introduction of judo into the school will improve the school climate, prevent violence and improve student concentration during the school day.

Hopefully we will have soon.

“
“Judo is a modern martial art with a sporting character, and it is crucial to shaping the child's personality and self-confidence, with emphasis on discipline, proper posture, muscle strengthening, mutual respect and values.”

While everyone had their eyes fixed on the tatami of ...

Judo Roots: It’s great to see that judo is spreading in Israel

Ahead the first GP of the year, the IJF arrived in ...

If you are interested to know more about judo in Schools in Israel, please feel free to contact:

“
My name is Eliran Malca, 33, a certified judo coach, black belt – 4th Dan, I started judo at the age of 4, I was a middle level competitive athlete. I have a private judo club in Ramat Hasharon with 150 children of all ages. I started working at the Israeli Judo Association in 2014. My role in the Israeli Judo Association is Deputy director-general and Manager of the Judo In Schools Project.
Eliran Malca 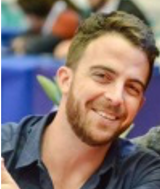