The Jamaican Judo Association (JJA) was established by 2016 Rio Olympian, Szandra Szogedi and President, Dwayne Barnett in April 2018. The Association began the work on the island in September 2018.

Why Jamaica? Mr. Barnett was born and raised in Jamaica until his teenage years when they moved to the United Kingdom. At the time of his childhood in Jamaica, cricket, football and athletics were the only sport you could practice at school.

“I have two children who started judo in the United Kingdom and shortly after I also joined to the adult sessions. The moral codes that the children been thought at training and how it reflects to everyday life, caught my attention. When I heard about the opportunity to establish judo in schools in Jamaica, I immediately thought it was a great idea and the population will benefit from it. Due to the high level of poverty in the island, there is unfortunately degree of aggression problem with the youth nowadays and judo is definitely a perfect fit to dissolve these frustrations; explained the President of the Jamaican Judo Association, Mr. Barnett”

The JJA began the work solely focusing on high schools in deprived locations to change young lives. Later our goal is to add primary schools to the project and follow the Judo in Schools program closely. This includes Kingston downtown and Spanish town in St. Catherine, which are commonly known as ‘rough’ areas of Jamaica. Here is the first promotional video:

JJA’s big slogan is to change lives. We believe that we can change lives if we can build a high-level center with a dojo and dormitory rooms where we can raise both champions in life as well as Olympic medalists.

Since the very beginning, the program is supported by the International Judo Federation with a great start off package of tatami and uniforms. This allows an island like Jamaica, where judo was none-existing, to begin and grow step by step. By the support of the IJF, the JJA was able to begin training sessions immediately. Each judo club is named after the school where the session is taking place.

Apart from IJF, Fighting Films is heavily supporting the development of judo in Jamaica. The Jamaican Olympic Committee has also begun to show interest in judo as a potential Olympic addition to their team. As per the locals, JJA gets a few odd freebies here and there with T-shirts or free drinks for events for example. We also get occasional help from friends abroad, like judogi donation, fundraising etc.

In Jamaica, high schools are NOT for free. Every single high school student has to pay a fee to be able to go to school. This is why a lot of children quit school after the basic education (primary school) and don’t go to high school. We created a judo fund that makes it possible for judoka to go to school and give equal opportunities for everyone. For now, our judo funds for school comes from friends and from our own investments. In the future we would like to set up a foundation to finance for the costs of education for our students.

Next to the judo lessons, it’s important to look to the circumstances of the children. In our case, some of the students don’t have enough food to eat. We have students walking an hour to get to training in the heat and on an empty stomach. Whilst this shows a great dedication, it is also very dangerous. We set up a food program where we provide meals for these judokas in need. Everyone that has the possibility (children, parents, friends, supporters) will bring food for our team. We are currently in talk with a company called Food for Poor in Jamaica to supply a certain amount of food for our team monthly. 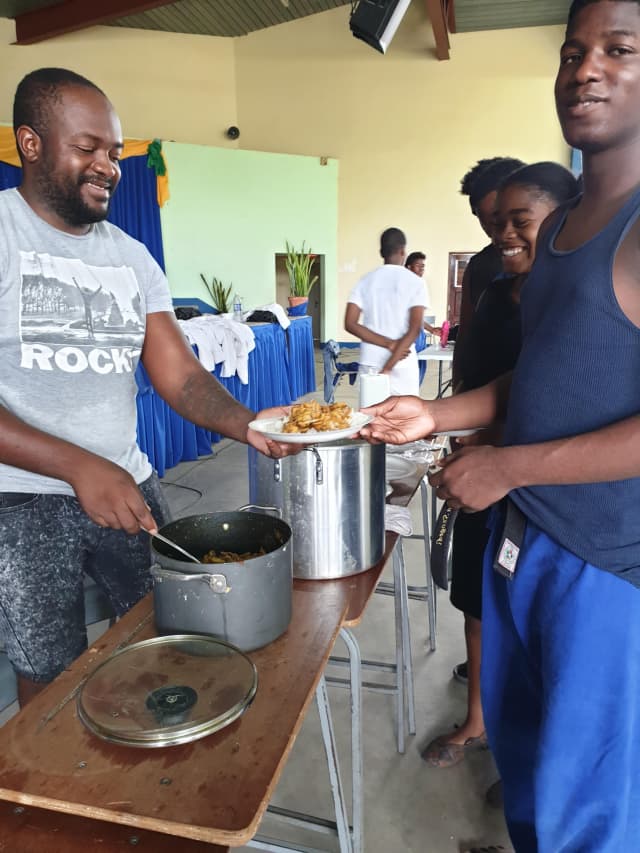 In Jamaica, unfortunately it is common for school girl students to face sexual abuse. The poverty of the girls put them in a very dangerous and unfair position. For example, the girls are forced to have intercourse with the taxi drivers, just to be able to get a free ride to school. Unfortunately, we had first-hand experience of this situation and knew we had to do something about this. We are working on a strategy to control these situations and give self-confidence to all girl students to be able to say no. Firstly, we make them feel safe in our judo family and bring them some new fresh air and self-confidence. We give them a purpose, show them that there is another way and that they can have dreams and be someone in their life. We also speak to their parents where and when it is possible. Knowing our community is important for us and we simply find out everything by regular communication with schools and parents.

“Become a champion in life through the values of Judo.”

Athletes in the World Judo Tour that started in Judo in Schools:

“
"Hunting medals is easy, everyone can do that, but changing someone's life and adding value to it through your teaching is immeasurable."