Written by Jo Crowley on 08. Aug 2021
Photographs by Emanuele Di Feliciantonio
Share
Lara is ten years old and lives in west London. She became a judoka some 18 months before the pandemic hit and despite the challenges of our last year and a half, she is glad she has judo in her life and acknowledges that it has played a part in how she has managed with all the changes that Covid brought.

“I like a lot of things about judo. I really like how we take care of our partner and that it is an essential part of how we practise judo. It doesn’t seem that all martial arts do that. It’s an activity that has a certain peace about it even though there is a fighting element. There’s a lot of fun at judo but also discipline and seriousness, which never take away from the fun elements. 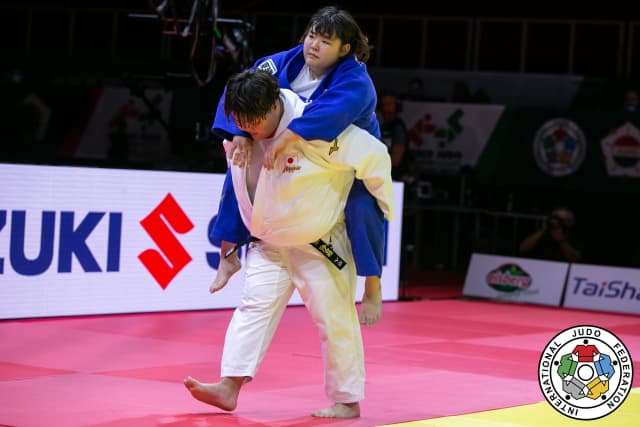 Sarah Asahina (JPN) taking care of her partner in the 2021 World Championship final.

I find the history of judo fascinating. History isn’t usually my favourite subject but with judo I’m always interested and want to know more. Looking back, for example, women were seen as too delicate to be involved in physical activity, especially fighting. Judo proves that men and women can access sport and even martial arts equally and the rules of judo allow everyone to take part and improve themselves. We can see how culture can change through the way judo is practised at different times and in different places.

I like the links between different parts of judo, such as history, more physical aspects and how it all links to life. Learning about why we kneel a certain way and how parts of our traditions can be linked to the Samurai and other elements of Japanese culture gives me a rounded understanding. It feels like there will always be something new to learn and I hope I can keep learning forever.

I like that when we test for our grades we have a little bit of freedom to choose some parts of our demonstration, as well as the syllabus and I like to learn the names as well as the techniques themselves, to feel fully involved with all of judo. The names for throws and holds are very interesting. Why did ‘tai-otoshi’ get chosen, for example, instead of a translation of ‘wide legs?’ Having contact with the Japanese language is something I’m sure I would never have had without judo.”

Lara also spoke about her first days at her judo club. "I felt inexperienced, of course, nervous and a bit different but at my club I quickly noticed there were other new people, like me and more new people came frequently, so I was made to feel comfortable straight away. The coaches were very friendly and always made sure each of us in the class were involved and making progress.” 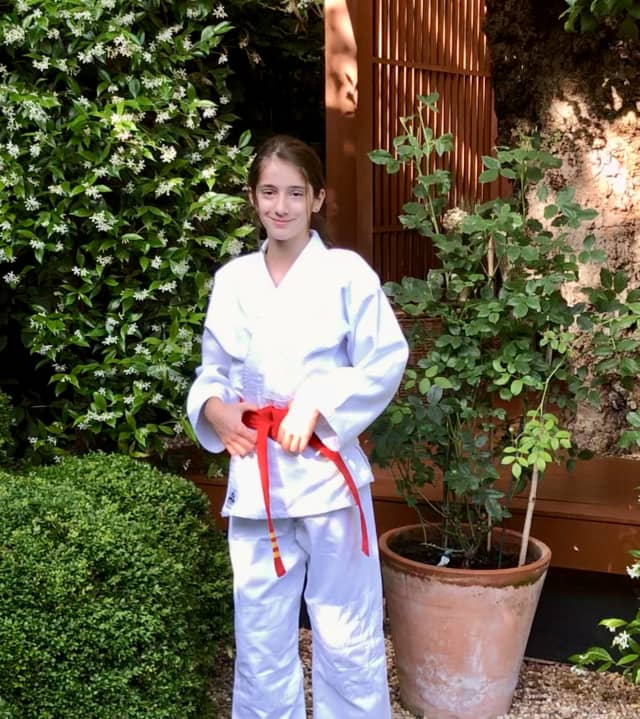 Lara became aware that there were senior judoka at her club and one was in the British Olympic team and this introduced yet more breadth to her understanding of the world of judo.

“I’m glad judo is involved in the Olympics because judo is the right martial art for it. My feeling is that judo is well suited to Olympic ideas, very well matched, almost the same ideas as the foundations of judo. Judo is unique, different from other martial arts.”

We all understand very well that the pandemic has had a dramatic effect on sport around the world and on the Olympic Games particularly, with the potential cancellation and eventual 1 year postponement at the forefront of our minds. We have heard many accounts of adaptation and struggle and can only marvel at how the elite string of our judo bow has managed to prepare so well for their target event. It is not only the elite whom have been shaken though; there is an effect at every level.

“It’s stopped us getting together and lots of people don’t have a brother, sister, parent or housemate to train with. It’s very different doing judo alone instead of with a partner. I really felt I wanted to train with someone my size or age but I’ve been fortunate to have had the technology to do online judo sessions with my club and also to have a younger brother to work with.

I think judo has had an impact on my relationship with my brother because we have learned to want to take care of each other more. As many arguments as we have, we do know that we care for each other. It’s great that tori and uke have to look after each other. I think it will have a positive effect on our relationship forever. I think mostly adults get on well with their siblings as adults but it can be difficult growing up together. Judo, especially during Covid, has made us have a closer bond much earlier than we might have. He may annoy me sometimes but I also want to protect him. 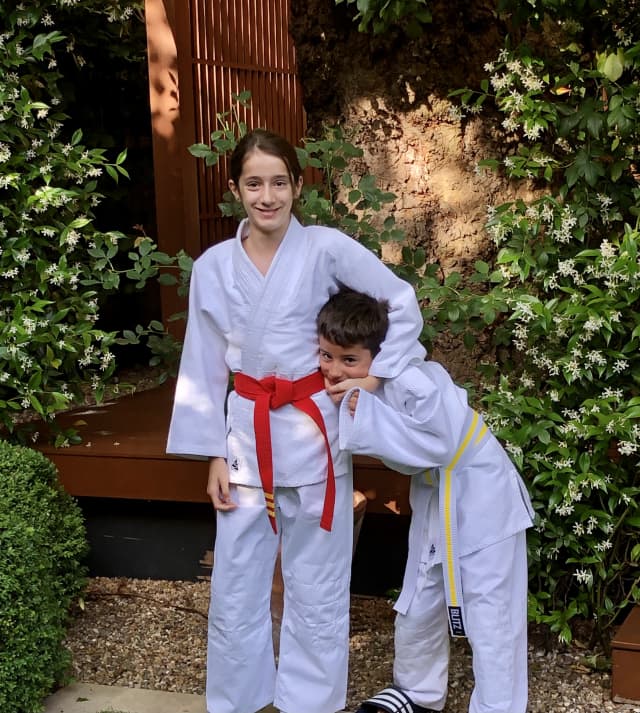 Lara and her little brother, Rex

I feel I have improved since I began and I like that what we learn at my club is more than simply the techniques of judo. Learning about etiquette and history and how to work together is important to me. Before I did judo I didn’t know I was like that, that I wanted to feel so integrated in the sport. I like the wider context.

Lara speaks clearly and without an intention to do so has illustrated, with just a few of her ideas and experiences, Jigoro Kano’s philosophy for judo being an educational tool, one that contributes to a better society. There are many thousands of children around the world who have had judo to help them stabilise their environment during the pandemic and Lara, along with her little brother, have also been eager to tune into the Olympic judo in recent days, knowing that she is part of something much bigger than just a sport.

As we also consider the impact our Erasmus+ project will have in the future, enabling many thousands of children to access judo and judo values through school integration across Europe, to begin to enjoy a life in judo the way Lara is, it’s exciting to think about the potential social reward for communities embracing judo.

Olympians, school children, club level players; all are judoka with shared values, a shared understanding and an immovable sense of belonging.

14. Jan. 2022 / The sharing of ideas has become an easier task over the course of the last two years.

08. Jan. 2022 / Planned, scheduled, noted, the SchoolJudo.EU trans-national meeting was due to go ahead next week in ...

SchoolJudo.EU
The Pilot Projects Are Gearing Up

18. Nov. 2021 / Recently we spoke with Saso Sindic of the IJF Judo for Children Commission, about his role in Mala Sola ...

08. Nov. 2021 / In terms of judo for school children, Slovenia offers much to think about.