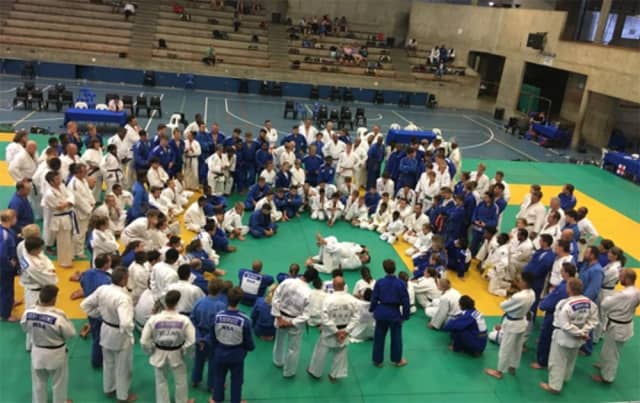 National Training Camp: the JFTW South African team participated in this important event that brought many judo players from all over the country to the University of Cape Town

Promotional judo classes were organized in Soweto at the Nike Training Centre, while the young participants of the programme were present at different events: National Ranking in Cape Town, National Training Camp in Cape Town, Gauteng Open and Westrand Grandslam.

As the development is not taking place only on the tatami, since the beginning of the year, Roberto Orlando has been working tirelessly and participated in several meetings in Pretoria, East London, Cape Town, Port Elisabeth or Bloemfontein to set up the second phase of the whole programme. Other meetings took place with the Judo South Africa representatives, NGOs to establish new judo clubs, UNHCR as well as other organisations.

Talking about the number of young children exposed to judo through the programme, Roberto Orlando explained: "We have a total of 421 children and young people who have been exposed to judo and have judo sessions at least twice a month. Regular practitioners – who practice at least once a week – are about 25% of the total. Judo for the world has a group of at least 60 children and youngsters who participated in at least two competitions. This is very encouraging.“

The leader of the programme also explained: “The months of January and February have been an intense period of judo activities and coordination. Much of the work has revolved around the Judo National Training camp in Cape Town from January 3-6, the field visits to Cape Town, East London, Port Elizabeth and Bloemfontein as well as the re-starting of judo activities with new sessions in Johannesburg (Alexandra Township, Soweto, St Edna secondary school, Kempton Park and Windsor East).“

A partnership was set up with Bellville Judo club (Sensei Godfrey Kleinsmidt) to open activities. Judo mats and uniforms have been already sent for opening judo activities at the DeWaveren primary school in Goodwood area. Mr. Kama, a Congolese refugee belonging to Bellville Judo Club will run the club that will work with the children in school as well as with external users. The Goodwood area is hosting different communities of refugees, migrants and South Africans so it is ideal for judo activities. Last but not least, a visit to the Football for hope centre in the Khayelitsha township took place, in order to launch judo activities.

A meeting with JSA district president Donald Sutherland was organized and a visit to Mdantsane township – second largest in SA - was held. The Mdantsane township hosts a foreign community that lives side by side to South African communities. Judo mats and uniforms are now available to open judo activities in a local gym.

The meeting involved Sondisa Magajana (JSA Development Director) and Sensei Ben Gallant. The objective is to open a refugee dojo in Kosten (Ward 11 of Port Elizabeth). The council of ward 11 has been briefed of the activities and has promised to offer access to the municipality hall.

Brendon and Calvin Marais are in charge of judo social cohesion activities in Bloemfontein Laerskool (Primary School). The activities just started in January and the plan is to expand judo to the nearby secondary school and to the general public.

Re-starting of judo activities in 2019

Hillbrow Dojo is the flagship of Judo for the World South Africa. It is located in central Johannesburg (a refugee densely populated area) in a compound managed by Outreach Foundation. 64m2 of tatami are available. The hall is also used for other recreational activities that attract youth to judo.

A judo day has been negotiated with the local St. Edna Secondary School every Tuesday afternoon. Demonstrations were held and classes have started for at least 25 teenagers.

This dojo has been successfully handed over to Sensei Jude Musedju - a Congolese Sensei registered in the JSA. The dojo is attended almost exclusively by refugees (90% from DRC) and judo is practices 3 times a week. Sensei Jude is assisted by other Congolese veteran judoka.

The dojo has 35 to 40 children regularly attending and is linked to the school activities in Fordsbourg Primary school. This dojo is attended by people coming from Pakistan, Kenya, South Africa, India, Bangladesh, Ethiopia, Uganda and Somalia.

The dojo has been recently established. Sensei Beaugus (DRC) and Sensei Fabien (DRC) run the dojo which is mostly attended by DRC children and adults. Mr Fabien was a former Olympian, who now lives in South Africa.

The dojo is run by Mr. Tao Linnegard with the support of Sensei Dirk Crafford and Sensei Kun. The dojo is located in a neighborhood where both South Africans and migrants/refugees live.

Judo mats and uniforms were delivered to the city of Bloemfontein. The dojo is run by two South African black belts who obtained already Level 2 IJF academy and are certified Judo Manager.

Two full tatami were delivered in October to Port Elizabeth but activities are still on hold, until the local council (ward 11) will make the municipality hall available to judo social cohesion activities. JICA (Japan) confirmed the arrival of a Japanese Judo Volunteer who will be based in Port Elizabeth to support Judo for the World activities.

Fordsburg Primary School: Judo is taught as an extramural activity to school students.

Roberto said: “As you can see, the Judo for the World programme in South Africa is growing fast. Nothing would be possible without the support of the IJF and the involvement of many people. Our team is composed of a core team of volunteers who are relentlessly assisting me and are supporting the ongoing activities in the dojo and the schools. In early January we established a management committee in order to run the different Judo activities with more efficiency.“

After the inaugural phase of the programme, Judo for the World South Africa has no entered into a second crucial development phase. We will regularly report on the developments in the upcoming months.